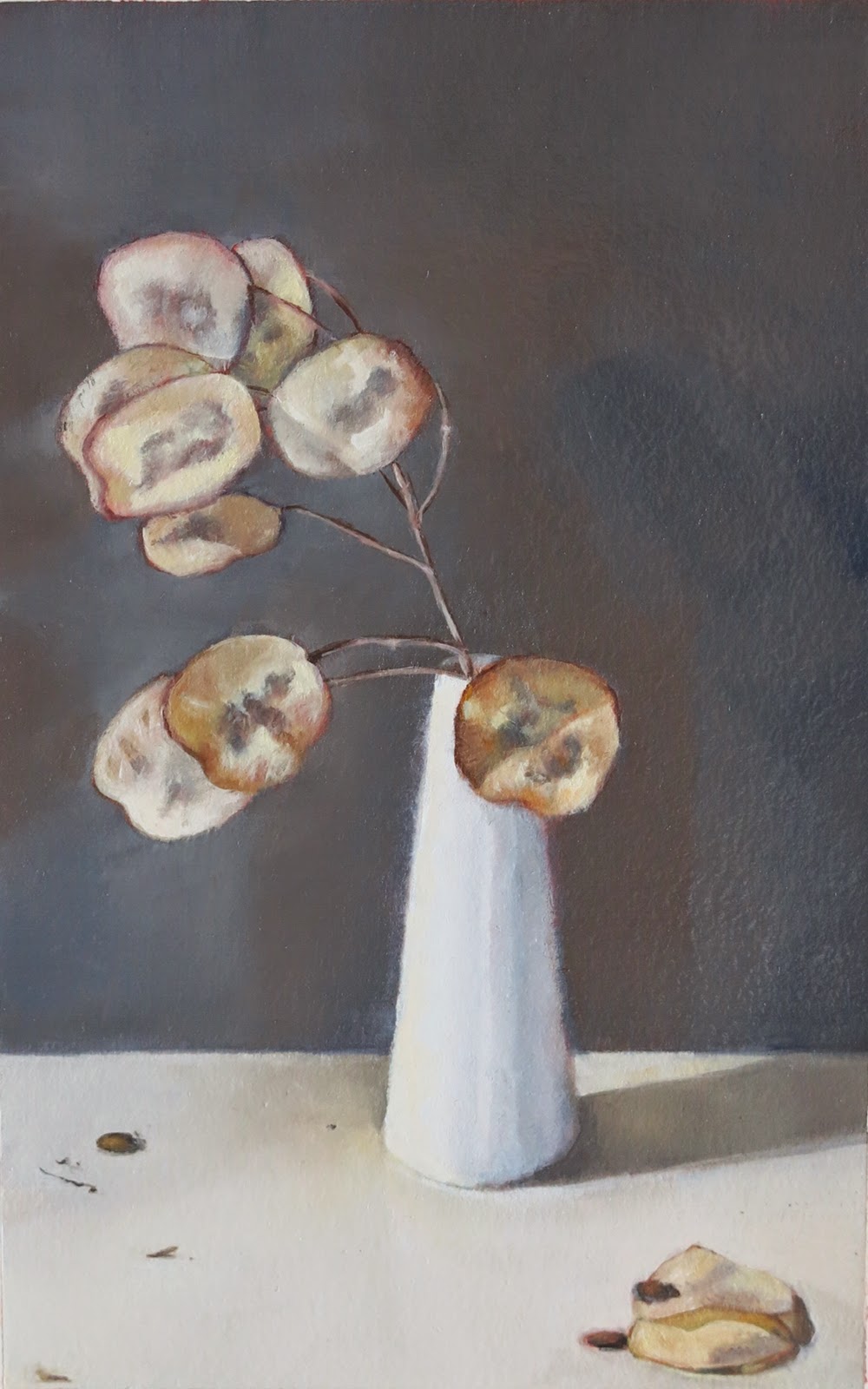 Another Lunaria cutting...
Posted by gabel karsten at 4:33 PM No comments: 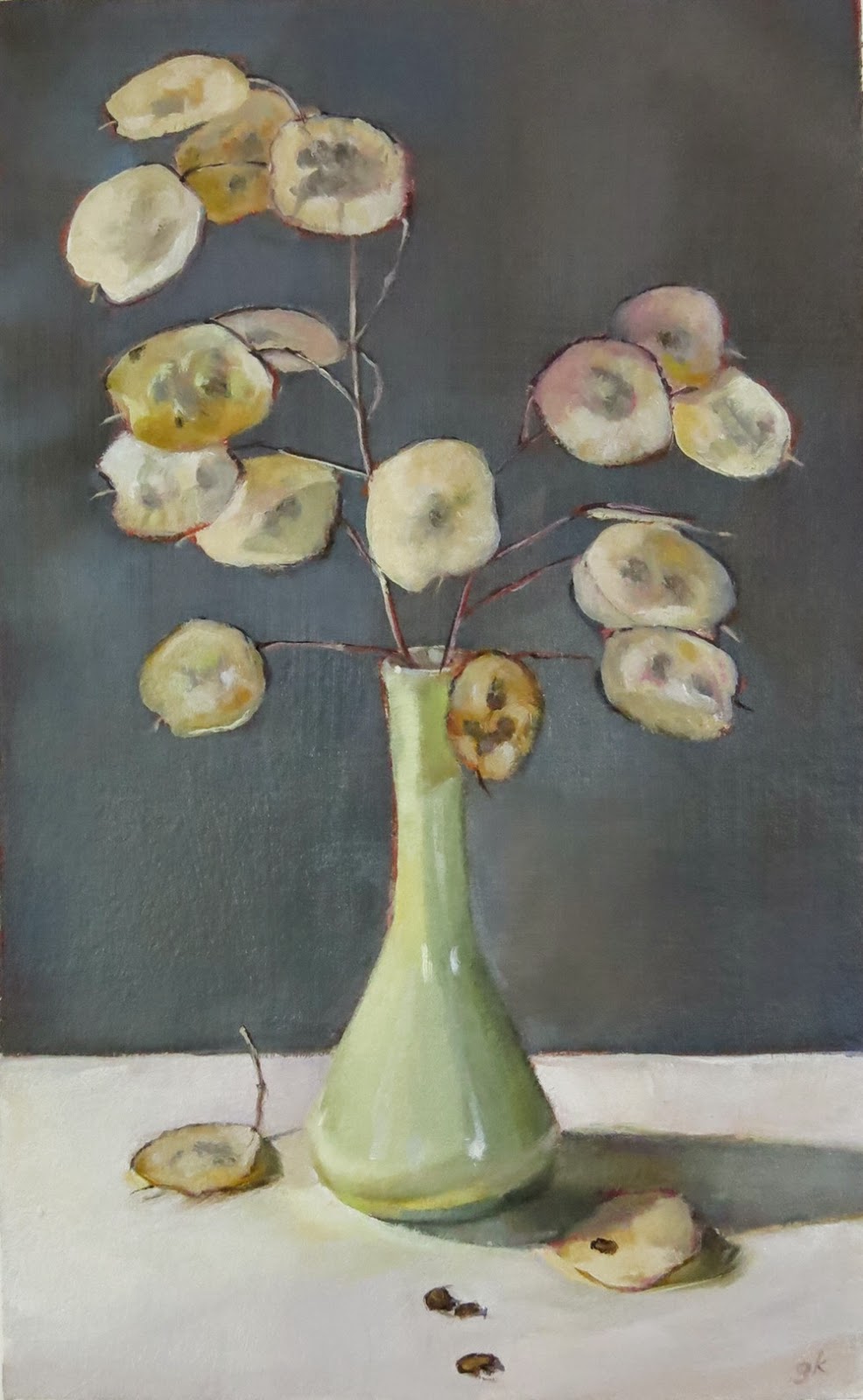 I carefully brought these cuttings back from our trip this summer to Portland, Or.  They're the dried seed  leaves of the Lunaria plant. I can't stop looking at them.
Posted by gabel karsten at 7:33 PM 1 comment: 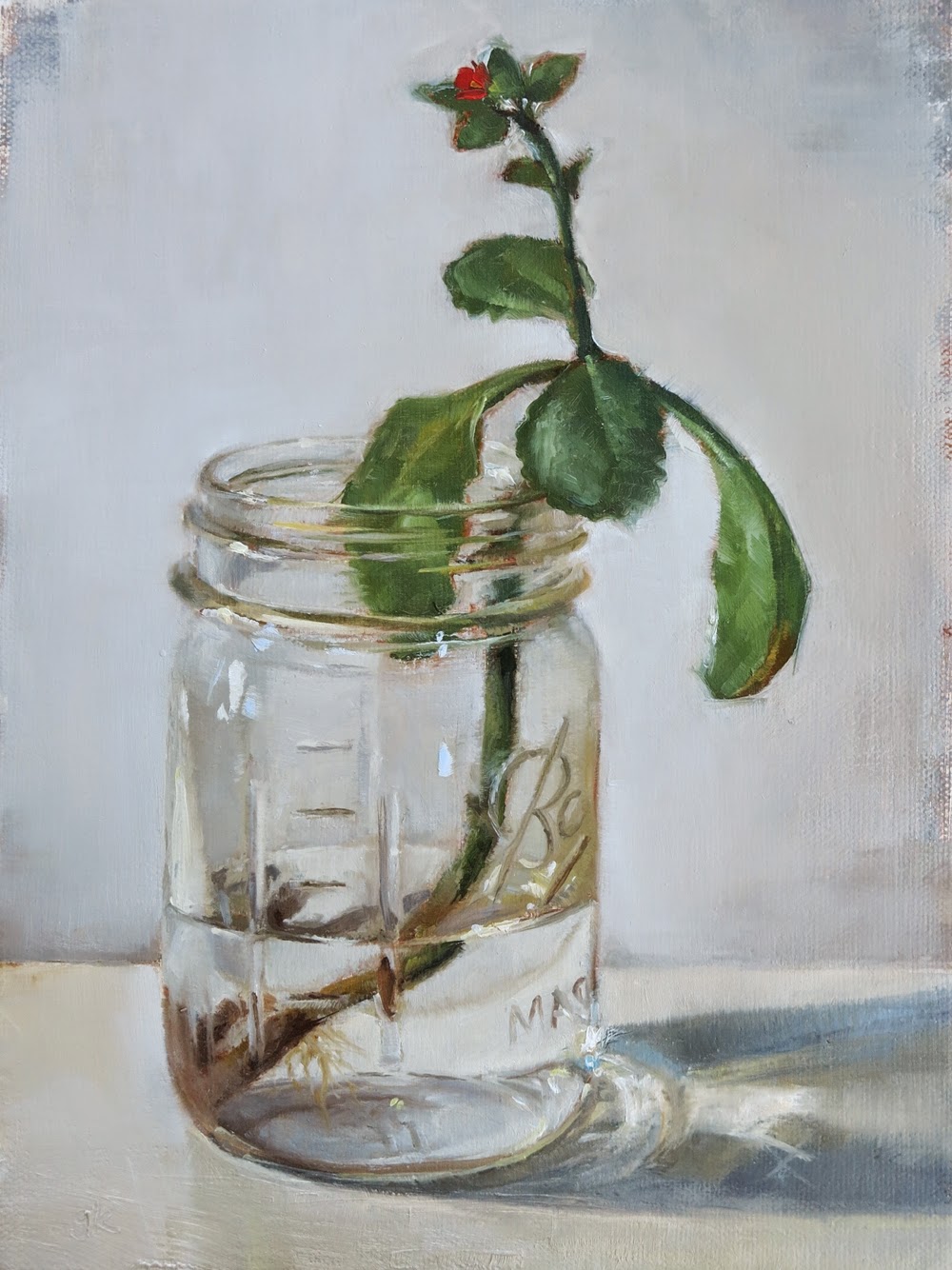 
On my recent flight home I met the artist Harry Ahn who, as I was later to learn, is a renowned portrait painter and a teacher in Michigan.  I showed him an image of the last painting I had done (middle image in column to the left) and he kindly and generously gave me a little critique.  Today, while looking at my second attempt of the Single Cutting, which I was never fully happy with,  I thought I would try changing some of the aspects that he had pointed out that could use improvement ---mainly the background and the shadow of the jar.  I didn't have the plant any more but I had the jar so I improvised and played around.  I think it worked. I'm much happier with it now.

So that's what I'm doing. And I realized I am a daily painter but I rarely can finish a painting in a day that I'm satisfied with….but maybe the rarely will become often with practice.

Posted by gabel karsten at 7:12 PM No comments: 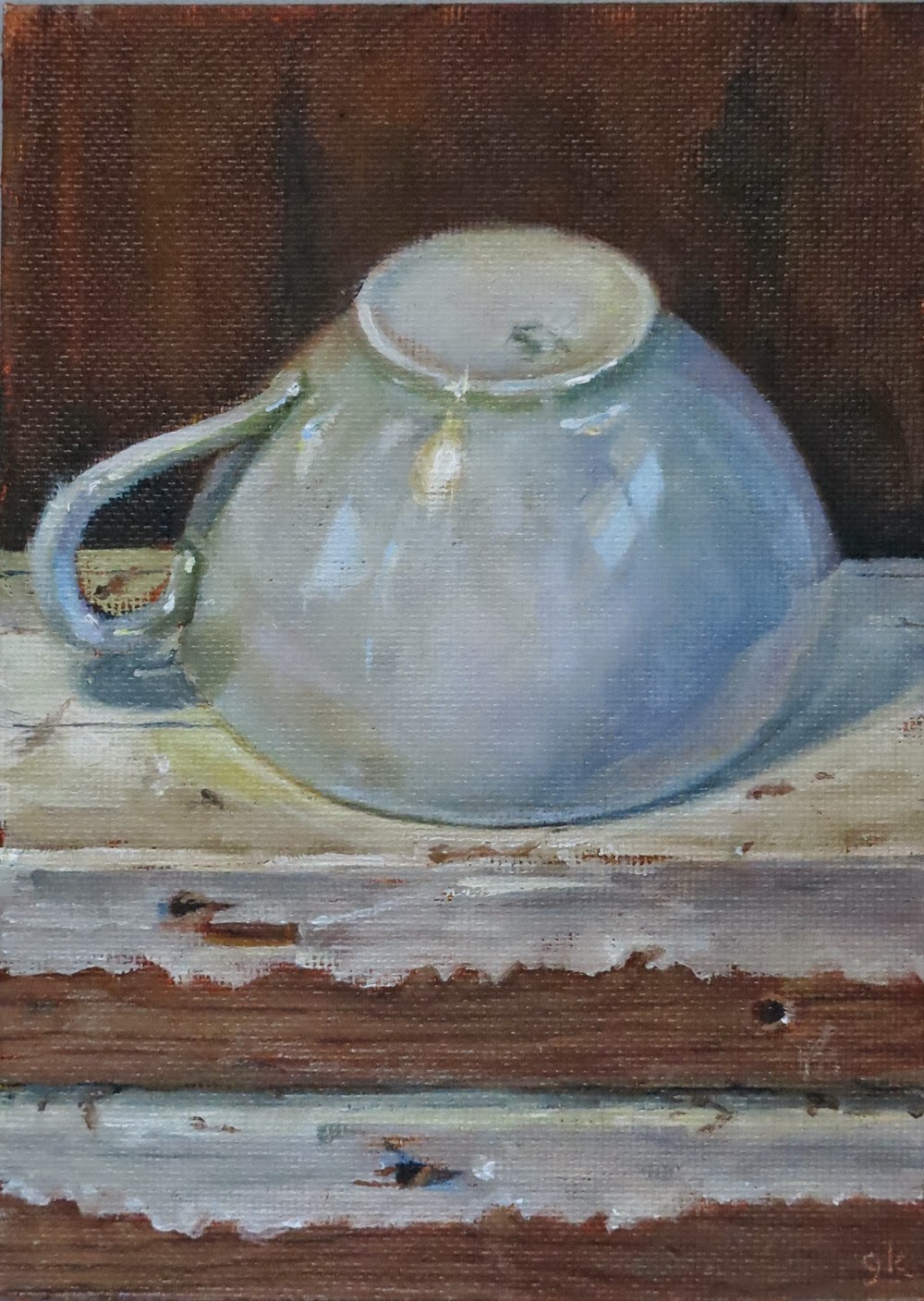 A small teacup with a pearl glaze on a stack of scrap two by fours (or on carrot cake as my friend thought).
Posted by gabel karsten at 8:05 PM No comments: 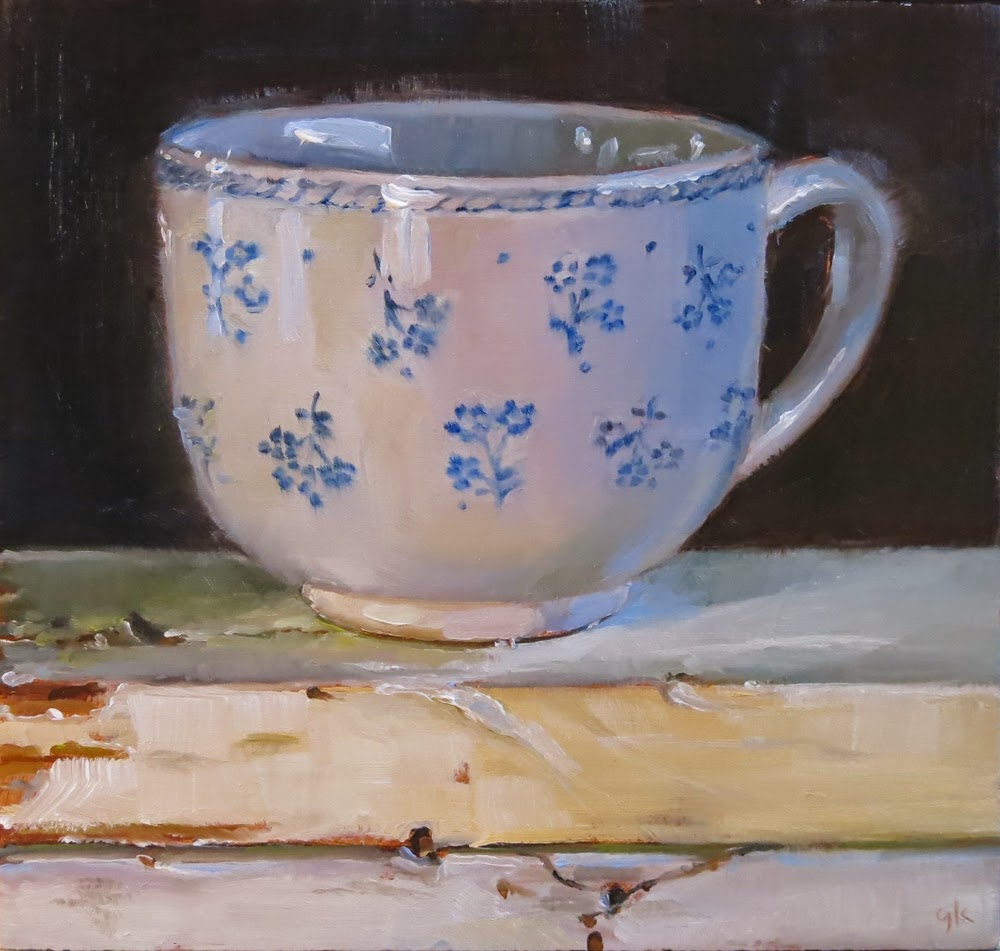 This is sweet, little tea cup from my mother-in-law that I set on piece of scrap wood that I dug out of a pile in her backyard---her house is getting some renovations.  I used the Quinacridone Red instead of my usual Alizarin Crimson and I think it worked well.
Posted by gabel karsten at 4:33 PM 2 comments:


I've just returned from visiting family and friends.  While away I had envisioned painting but it didn't happen.  I did read a book on color harmony in which it recommended the use of Quinacridone Red in place of the less permanent Alizarin Crimson. I bought a tube and when I got home I set up a simple still life with an apple and gave it a try.  It was a disaster.  I felt like I had forgotten everything I had ever learned about painting. After sulking for a day I decided to just mix colors and get familiar with the paint again. So I did the above charts comparing the two reds. The top group is Alizarin Crimson, the bottom is Quinacridone Red. Each is mixed with my favorite colors (top horizontal row) then lightened with white (vertical row). It's hard to tell from this photo and being so small on the computer, but there is clearly, although subtle, differences.  Alizarin Crimson is blueish and the tints have a smokey quality in comparison to the Quinacridone Red which is also less transparent than Alizarin.  Quinacridone Red and Cadmium Orange make a beautiful bright red.  The most significant difference I found was when mixing with other transparent colors. I'm still partial to the Alizarin as I'm more familiar with it but I think the Quinacridone can be adapted. I'm going to give it a try.
Posted by gabel karsten at 8:29 AM No comments:

It has always been in my nature to be making things any chance I can, so I was thrilled to find a huge internet community of artists posting their daily works. Inspired by the blogs of daily painters, I started my own in November 2011. Depending on the day, I will try and share what I've worked on, usually a painting, a drawing, or ceramics, and maybe some thoughts along with it. Thank you for looking and I hope you enjoy the work.